Inspired my post on Dido Elizabeth Belle. If you are a history buff or someone interested in the lives of people like Dido, this short film is for you. I really enjoyed it. One never stops learning. Each day brings a new story, a new experience on our journey through life. What kind of a life did Dido  have and what events had shaped her life? How many women were like Dido in that period – 1760s to 1804? Hmmm…makes one think.

I came across a video on Twitter. It is a very interesting and moving story of a young girl who was brought up in a wealthy family. Born circa 1761 and died 1804. This is the story of her life at Kenwood House.

I visited Kenwood House in May 2008.  A very nice house and a listed building.  The surrounding manicured gardens were just great. I couldn’t help wondering what it was like growing up in England in a house like this and what were her favourite pastimes? Apparently hers was a very interesting life.

Her father was a captain with the British Royal Navy but little is known about her mother.  Dido was sent to live with her uncle the Earl of Mansfield at Kenwood House, Hampstead, England when she was very young. Despite being brought up like one of their family and member of the household, she was never treated as an equal and would be made scarce when guests were around for dinner. 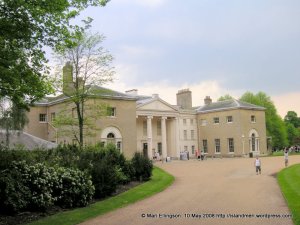 Little is known of her later life. Her father did not leave her any money when he died however Lord Mansfield did leave her about £500 in his will when he died.

In 1793 Dido married John Davinier and had three sons. She died in July 1804 and was buried in the St George Hanover Square (off the Bayswater Road).

There are lots of places where you can read about Dido Belle which I’ll be doing. The video tells Dido’s story so well. Don’t you wish that we had video cameras, camcorders, Youtube etc at that time.

I only learnt about Dido Belle because I met a few people who make it their business to preserve these histories and to continue to honour the memories of people who through no plan or design of their own found themselves in countries like England. They benefited some, but mostly suffered all kinds of injustices and untimely deaths. May God forgive through His everlasting mercy.

I am really pleased to learn about Dido Elizabeth Belle. Such courage, such honour. RIP.